Here are some of the bollywood songs,which are classic and would surely be heared during Ganesh Chaturthi celebration in coming days. 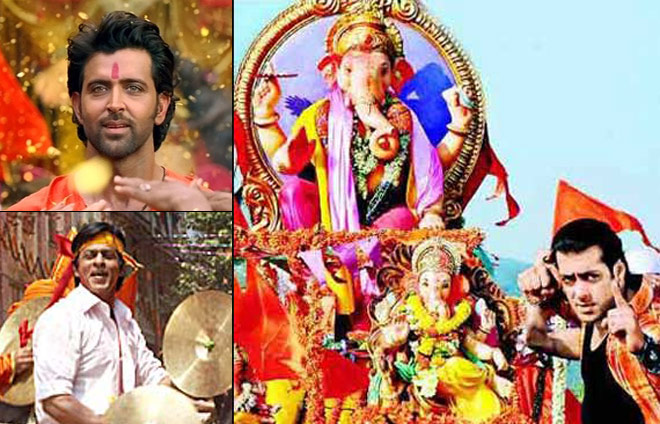 This song is picturized on Amjad Khan,the Sholay movie fame ‘Gabbar’. Till the date this is the most popular number played without fail during the festival. Amjad Khan,Mithun Chakravarthy,Danny Dangzongpa and Vijayendra Ghate danced on this number form the film ‘Humse Badhkar Kaun’.

This song is from the original ‘Agneepath’. The song ‘Ganpati apne Gaon Chale’ featured Vijay Dinanth Chauhan(Amitabh bachchan) in a more authoritative mode while Mithon Cgakravarthy did the dancing. They both performed best in this song. The song is composed by Laxmikant Pyarelal.

This Ganesh Aarti is in pre-climax of Mahesh Manjrekar’s film ‘Vaastav’ which marked the downfall of crime and criminals in the film. The song stares Sanjay Dutt,Reema Laago,Shivaji Satam and is composed by Sammer and sung by Ravindra Sathe.

The song ‘Shree Ganeshay Dheemahi’ is from the movie ‘Virrudh’ and is sung by Shankar Mahadevan. The movie starred Amitabh Bachchan,Sahrmila Tagore,Sanjay Dutt and John Abraham. The movie is directed by Mahesh Manjrekar.

This song is picturized on Shah Rukh Khan where he danced during Gansh Festival on this song. This song is from the movie ‘Don’. This song became very popular and is composed by Shankar Ehsaan Loy,written by Javed Akhtar and is sung by Shankar Mahadevan.

This song is from new ‘Agneepath’ where Hritik Roshan danced on it and gave his introduction with the iconic line ‘Vijay Dinanath Chauhan’ towards the end of the song. It is high energy devotional song.

This song his from Prabhu Deva;s superhit movie ‘Wanted’ featuring Salman Khan and sung by Wajid Khan. Prabhu Deva,Govinda and Anil Kapoor make surprise entry in the song which was an instant hit eapecially during community celebrations.

This beautiful song from ‘Aasoo Bane Angaarey’ celebrated Madhuri Dixit’s dance at a Ganesh Chaturthi celebration. The song is directed by Rajesh Roshan and sung by Lata Mangeshkar.

This song is not only a visual treat but an upbeat number. Hard Kaur infused her rocking rapping essence to the Ganpati aarti making it modern. This song is choreographed by Remo D’Souza from movie ‘ABCD-Any Body Can Dance’.

This song is from the movie ‘Takkar’ and is written by Anand Bakshi,composed by R.D Burman and sung by Kishore Kumar And Mahendra Kapoor.