Cassettes, Milton bottles, landlines, Door Darshan, Mango Bite, and candy cigarettes – these are some things exuding nostalgia. Similarly, some board games are closely related to one’s childhood, especially if you are a 90s kid. 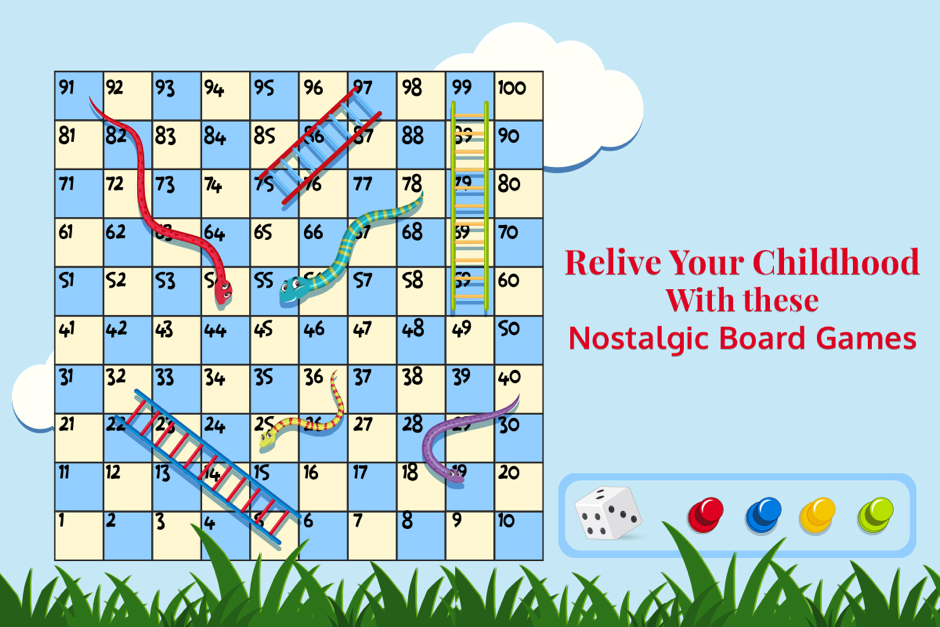 Let’s go down the nostalgia road by playing the following board games.

Who hasn’t spent endless hours in front of the Snakes and Ladders board? It is a dice game and typically comes on the same board as Ludo. Unfortunately, the game never went out in style, and most players have made the mistake of moving the token as they roll six.

Starting at one, players move their tokens from left to right. Each player is assigned a single token, and the game is started by whoever rolls the highest number. After that, the token moves according to the number rolled. When the token comes to the square with a ladder, the player can climb the ladder and land on a higher-numbered square. But if the player comes across a snake, their token is figuratively eaten by the snake and sent to a lesser-numbered square.

The game is pretty exciting, and the primary purpose of this board game was not only entertainment. The board game taught people morality. The idea is that the players moved from lower levels of consciousness to higher levels of spiritual enlightenment. Finally, achieving moksha.

Although not many people play this game anymore, it is not impossible to take this nostalgic journey. Get a Snakes and Ladders game board or play Snakes and Ladders online. Connect with random opponents and play real-time challenges.

Chess is a board game enjoyed worldwide but originated in ancient India in the 6th century CE. During the Gupta empire, people enjoyed chess, and it took the world by storm.

It is a traditional board game used for sharpening the mind. Those who are good at chess are considered geniuses. Look at Vishwanathan Anand!

Chess is played on a checkered board between two players. The playing pieces on the board are moved according to the specific rules. The goal is to directly attach the opponent’s king so that the king’s escape is impossible.

The popularity of chess has entered pop culture, and you can even watch a series on one of the most famous chess moves, The Queen’s Gambit.

Love it or hate it, you cannot ignore chess. The game can sharpen logical reasoning, memory skills, and more. If you’re great at it, you can even become one of the grandmasters of this board game.

Carrom board has always been a favorite of the 90s kids. People would play this game until their fingers hurt.

The game is played between two to four players and is as challenging as it is exciting. The quest for the queen would get things heated up. Friendships would be on the line.

Players would forget about everything else in their lives and solely focus on measuring the angle carefully and positioning the striker or disc on the board. If the white or black carrom men were not pocketed as planned, it would cause disappointment.

If things would not favor the players, the trick was to pour a lot of talcum powder on the board so that the board was slippery enough for the pawn pucks and strikers to collide.

Today, carrom games are played online. Install the app, and you will be randomly matched with real-time opponents. Challenge them to win cash rewards.

Ludo is the most recognizable board game played between two to four people. Each player is assigned four tokens of their chosen color, and the objective is to move the tokens toward Home or the finish line.

Although you have no control over rolling the die, you can strategize your moves to beat your opponents. Thanks to the addition of online variations, you can start playing Ludo all over again. Relive your childhood and connect with players worldwide. You can also win cash rewards by entering 1VN tournaments.

Monopoly is a fun board game played between two to four players. The game helps players understand economics, money management, and the concept of power. Each player has to roll the die and move their chosen token across the board. As they go around the board, they can purchase real estate and develop them by building houses and hotels. Other players must pay rent whenever they land on someone else’s property.

The game goes on until someone declares bankruptcy.

Initially, the game might be a bit complex to understand, but you’ll get the hang of it. Monopoly games are available online, so you can satisfy your urges to buy, develop, and sell properties whenever you want.

Chinese Checkers is a game that brings whimsy and fun to board games. The game was regarded as the best offering during the 90s, and kids would stay hooked for hours. The game is colorful and entertaining and teaches players the importance of strategizing. The game is perfect for brain development.

Have you played tic-tac-toe? Connect 4 is an alternative to this game and a lot harder. Instead of getting at three in a row, the objective is to get four in a row.

It is a two-player game where players take turns dropping colored discs from the top into a seven by six vertically-suspended grid. Since this is a strategy game, players cannot drop the discs wherever they choose. Instead, they have to think before making their move.

Ready to take a trip down memory lane? These board games will fill you with nostalgia and ensure you have a good time.